A set of three Japanese limited edition picture discs of the first three albums by Madonna.

Offered for sale is a rare complete set of Japanese limited edition picture discs of the first three albums by Madonna – The First Album, Like a Virgin, and True Blue.

About these copies: This is a complete set of the 1987 Japanese limited edition picture discs of Madonna’s first three albums.  All three LPs include the sticker that was used in place of an obi and the original lyric insert.

Plastic sleeves, inserts, and discs are all M-.  The discs appear as though they may be unplayed.

A beautiful copy of a set that’s quite hard to find complete.

Background: Madonna sold a lot of records around the world after the release of her 1983 debut LP, the self-titled Madonna.

She was particularly popular in Japan, where far more of her songs were released as singles than in the U.S. or the UK.  In 1987, shortly after the release of the True Blue LP, her Japanese record company decided to issue her first three LPs as limited edition picture discs.

While her first album was originally released in Japan with the same title and cover as the U.S. release (Madonna,) the picture disc of the album was retitled The First Album and used the alternate artwork from the UK release.

The cover art and titles of Like a Virgin and True Blue were the same as the U.S. and UK issues.

As these picture discs had a higher price (¥3000) than the standard LPs, they didn’t sell particularly well.

Note: The picture disc of The First Album was reissued in 2018 in the U.S. as a limited edition for Record Store Day.  Those discs have different stickers and catalog numbers from the version offered here, which is the original 1987 Japanese release. 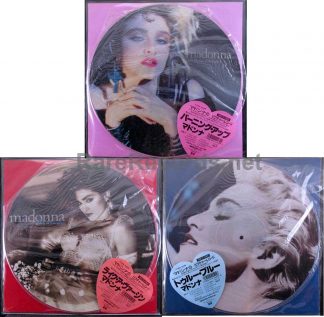