A copy of the 1966 radio show Stars for Civil Defense, featuring rare tracks from Lesley Gore and Roy Hamilton.

Offered for sale is a rare 1966 radio show, Stars for Civil Defense, featuring one side by Lesley Gore and one side by Roy Hamilton.

This rare radio show features material that was recorded specifically for this show and which has never been commercially released!

About this copy:  This copy of Stars for Civil Defense is an original 1966 mono LP, issued for radio broadcast.

The LP was issued without a cover.

The disc is VG; it still has lots of shine and likely hasn’t been played but a few times, but it has a few light marks on each side of the vinyl.

A nice copy of a rare radio show and only the third copy we’ve ever seen.

This copy of Stars for Civil Defense is program 519/520, featuring the two artists listed above as well as Ray Bloch and his orchestra, intended for broadcast during the fall of 1966.

This is Lesley Gore’s (and Roy Hamilton’s, for that matter) rarest LP containing unique material. The songs on this album were recorded especially for this program and have never been commercially released.

If you collect either Lesley Gore or Roy Hamilton, chances are you have never seen this album. Issued in small quantities in the mid-1960s, the Stars for Civil Defense series was a short-lived radio program offered by the U.S. Government to keep the public informed about being prepared in the event of a national emergency. All programs in this series are rare.

The Stars for Civil Defense series consisted of a number of albums that featured one artist on each side, with each program running for 15 minutes. There were other, similar government-sponsored music programs in the 1960s, such as Voices of Vista, representing a poverty fighting organization, and The In Sound, which was intended to promote Army recruitment.

All of these programs featured several songs by the featured artist, as well as a brief interview. The songs in these programs were generally the artists’ most recent hits. What made the Stars for Civil Defense series different is that the songs were recorded especially for the Civil Defense program. The material that appears on these records is unavailable anywhere else.

The record label indicates that the album was intended to be broadcast on September 25, 1966 for Roy Hamilton and October 2, 1966 for Lesley Gore. 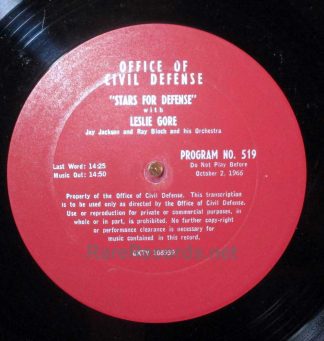