A Japanese pressing of the Wedding Album by John Lennon and Yoko Ono, complete with original obi and all inserts.

Offered for sale is a Japanese pressing of the Wedding Album by John Lennon and Yoko Ono, complete with original obi.

About this copy: This copy of Wedding Album is a 1977 Japanese issue and includes the original obi and all inserts.

The box is VG++, with faint wear at the corners.  The obi is VG+, with slight wear.

All are M-; the record shows a couple of spindle marks but no other signs of play.

The cover has two small seam splits in the center of the top and the bottom from the record shifting over time.  We have repaired those.

A beautiful copy of a box set that rarely turns up anymore. 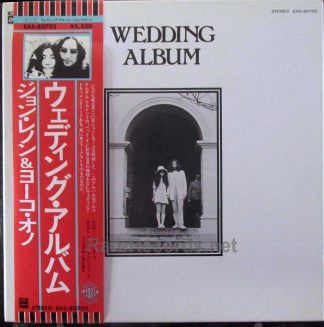