A Japanese pressing of the Wedding Album by John Lennon and Yoko Ono, complete with original obi and all inserts.

Offered for sale is an ultra-rare original red vinyl Japanese pressing of the Wedding Album by John Lennon and Yoko Ono, complete with original obi.

This copy is complete, clean, and all original!

About this copy: This copy of Wedding Album is an original 1969 Japanese pressing on the Apple label, catalog number AP-9010 and pressed on “Everclean” red vinyl.

The box is VG++, with a “nick” near the upper right hand corner.  All of the corners are intact.

The obi is VG++, with a few faint wrinkles, but no tears.  The “hojyuhyo,” or reorder tag, is still attached.

All inserts are original and have the original AP-9010 catalog number on them except the cake photo, which has no number.

The gatefold cover is M-, with trace corner wear.  All of the inserts are M-.

The red vinyl disc is M- with a faint 1/2″ inaudible scuff on side one and a couple of minor sleeve scuffs on side two.  There is a single spindle mark on the side two label, suggesting that the record might have been played once.

A beautiful copy of an ultra-rare John Lennon item.  Until we found this copy, we weren’t even sure this album existed on red vinyl.  Even the black vinyl copies are nearly impossible to find.

The box set was briefly available in Japan in 1969, pressed on both black and red vinyl; both versions are extremely rare.   The album was reissued in Japan in 1978 on a different label and with a different catalog number and obi. 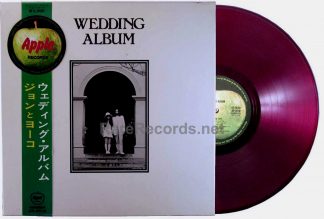