An unopened Japanese pressing of the Wedding Album by John Lennon and Yoko Ono, complete with original obi and all inserts.

Offered for sale is a sealed Japanese pressing of the Wedding Album by John Lennon and Yoko Ono, complete with original obi.

About this copy: This copy of Wedding Album is an unopened copy of the 1977 Japanese issue and includes the original obi and all inserts.

This copy was acquired from the stock of a former retailer; the album is sealed in a plastic bag that is taped shut and has an import sticker (“EMI Imported Records From Japan – Disques Importes.”)

It’s pretty obvious that this album has never been opened.

The box and obi are M-; the contents are presumably mint, and the record is presumably new and unplayed.

Your final upgrade of a box set that rarely turns up anymore. 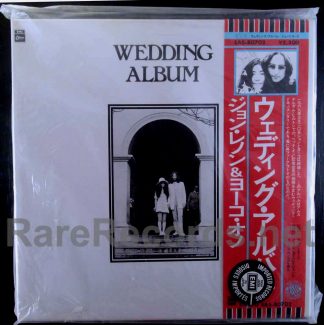