About this copy: This copy of Monterey International Pop Festival is an original, still sealed copy featuring the original withdrawn cover with artwork used to promote the Monterey Pop Festival.

The wrap is fully intact with no rips, tears or holes.  There is a rivet punched through the upper left hand corner of the cover, indicating that this album was sold as a cutout.

Background: In mid-1970, Reprise Records was getting a bit impatient with Jimi Hendrix, as they hadn’t received a new album from him in quite a while and they were eager to release something new.

With no new Hendrix album in hand, Reprise released an album of material from the Monterey International Pop Festival, recorded in June of 1967, featuring Jimi Hendrix on one side and Otis Redding on the other.

The timing was perfect from a sales perspective; the album hit the store shelves just three weeks before Jimi’s untimely death and reached #15 on the charts.

The original cover art featured artwork from the posters used to promote the Monterey International Pop Festival. Due to legal threats from the promoters of the festival, this cover was withdrawn shortly after release and replaced with another one that featured multiple photos of Hendrix and Redding. (see photos for example)

>This record is eligible for PayPal Credit financing by PayPal. U.S. customers may choose to pay later at checkout, and may receive up to six months financing with no interest. Click the banner below for more information. (opens in a new window) 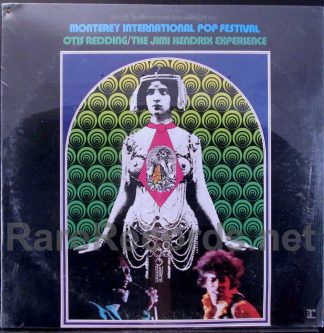