A rare still sealed colored vinyl copy of the double album Broadcasts/Maui by Jimi Hendrix, issued on the Trademark of Quality label.

Offered for sale is a rare still sealed colored vinyl copy of the 2 LP live album Broadcasts/Maui, by Jimi Hendrix, released by the Trademark of Quality label.

About this copy: This copy of Broadcasts/Maui is a later TMOQ pressing, with “COLORED VINYL” printed on the included insert.

As the album is still sealed, the records are presumably new and unplayed.

The shrink wrap is fully intact except for a tiny break in the lower right hand corner.   The original insert is included, and is M-.  An original price sticker is attached to the shrink wrap (not shown in photo.)

As the album is still sealed, the color of the vinyl is unknown.  We’re aware of copies pressed in red, blue, yellow, and green.  Other colors may exist.

Label variation is unknown.  These discs may have TMOQ “sideways pig” labels or they may have no labels at all.

A beautiful copy of a rare Hendrix live LP and one that is almost impossible to find sealed.

This will likely be your final upgrade.

Background: Released in July, 1973, Broadcasts/Maui was part of a short-lived “budget” series by the Trademark of Quality label that packaged together two separate albums that had previously been released individually.

As these titles had all been previously released, sales were relatively poor and the series was discontinued after a brief time.

Broadcasts and Maui had both been issued in June, 1971 as separate LPs, but for a short time, they were available as a pair.

Contents of the double album are as follows: 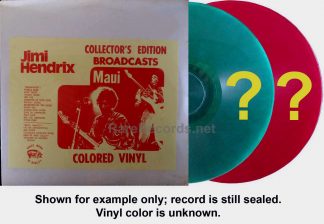