A test pressing of Band of Gypsys by Jimi Hendrix, pressed on 180 gram vinyl by Classic Records.

Offered for sale is a 180 gram test pressing of Band of Gypsys by Jimi Hendrix, pressed by Classic Records.

About this copy: This copy of Band of Gypsys is a test pressing for the limited edition 180 gram audiophile pressing that was issued in the late 1990s by Classic Records.

The disc is M-. aside from an inaudible scuff through the first track.

A nice copy of a rare Hendrix LP.

Released in June, 1970, Band of Gypsys was the first live album by Jimi Hendrix.  Despite mixed reviews, the album reached the top 10 in both the U.S. and the UK.

Band of Gypsys was the only live recording authorized by Jimi Hendrix before his death. It was recorded and released in order to get Hendrix out from under a contractual obligation that had been hanging over his head for a couple years. …The music was a seamless melding of rock, funk, and R&B, and tunes like “Message to Love” and “Power to Love” showed a new lyrical direction as well. Although he could be an erratic live performer, for these shows, Hendrix was on — perhaps his finest performances. … The solo on “Machine Gun” totally rewrote the book on what a man could do with an electric guitar and is arguably the most groundbreaking and devastating guitar solo ever. …. Band of Gypsys is not only an important part of the Hendrix legacy, but one of the greatest live albums ever. 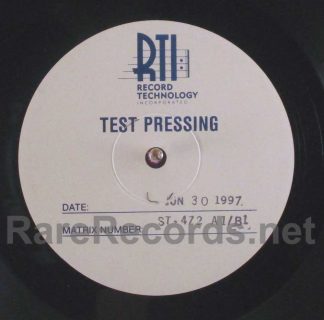