A 1974 Japanese pressing of Thick as a Brick by Jethro Tull, complete with original obi.

Offered for sale is a rare Japanese pressing of Thick as a Brick by Jethro Tull, complete with original obi.

About this copy: This copy of Thick as a Brick is a 1974 Japanese issue of an LP that was originally issued in 1972.  This was the last Japanese pressing to include the full “newspaper” style cover.

The cover is VG++, with trace wear at the edges.  The lyric insert is M-.  The obi is VG+, with a few wrinkles, but no tears, which is unusual for this title.

A beautiful copy of a terrific record and a very difficult album to find as a Japanese pressing.

Background: Released in 1972, Thick as a Brick was the fifth album by Jethro Tull.  The album reached #1 on the U.S. album charts and #3 in the UK.

Allmusic.com gave Thick as a Brick a 4 1/2 star review:

Jethro Tull’s first LP-length epic is a masterpiece in the annals of progressive rock, and one of the few works of its kind that still holds up decades later. Mixing hard rock and English folk music with classical influences, set to stream-of-consciousness lyrics so dense with imagery that one might spend weeks pondering their meaning — assuming one feels the need to do so — the group created a dazzling tour de force, at once playful, profound, and challenging, without overwhelming the listener. 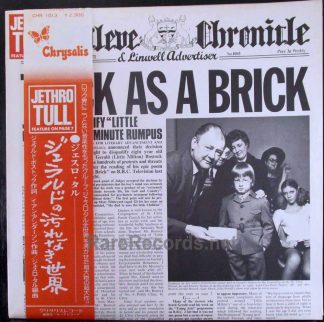