About this copy: This copy of Benefit is a Japanese 1977 white label promotional copy on the Chrysalis label, complete with lyric insert and original obi.   This is the second issue; the first issue was released in 1970 on the Reprise label.

This LP has the UK track listing, including “Alive and Well and Living In,” but excluding “Teacher,” which appeared only on the U.S. release

The cover is VG+, with faint wear at the edges and corners.  The obi is VG++, with slight wear on back, but no rips or tears.

The original lyric insert is included.

A beautiful copy of a very rare record, as Jethro Tull albums sold quite poorly in Japan.

Background:  Benefit was Jethro Tull’s third LP, and it was the album where they abandoned their blues roots and embraced the flute-folk-rock sound that they’d use successfully for the rest of their career.

Based on tracks such as “Teacher” (which was not on the UK release), “With You There to Help Me”, and “To Cry You a Song”, the album reached #11 on the U.S. album charts and was certified gold by the RIAA.

In the U.S. first pressings of Benefit were issued on the Reprise label.  In 1972, the album was reissued on the Chrysalis label, as were all subsequent pressings.  Reprise pressings, particularly clean ones, have become rather hard to find. 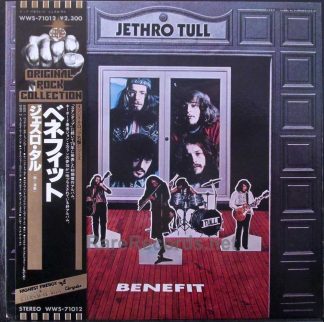