Offered for sale is a sealed original mono pressing of the Hollies album Hear! Here!, released in 1965.

About this copy: The early American Hollies albums are surprisingly hard to find, especially in playable condition.

The copy offered for sale is a scarce original mono pressing, which was only available for a relatively short time before being deleted. The album is still sealed and presumably unplayed.  There are no rips, tears or holes in the cover or wrap.  There is a small amount of foxing on the back cover.

Background:Like the Beatles and the Rolling Stones, the Hollies’ albums of the 1960s were issued in different versions in the United States and Great Britain.  This was due to the fact that American record companies included singles on their albums and those in the UK did not.

Hear! Here! was the band’s second American album, and was more or less the same as the UK album simply titled Hollies.  The album removed “Fortune Teller” and “Mickey’s Monkey” from the UK version but added “I’m Alive” and “Look Through Any Window” to the LP and then arranged the running order of the songs.

You can hear “Look Through Any Window” here:

This is just about the nicest copy of this album you’ll ever hope to find.  Pretty good record, too.
This record is eligible for PayPal Credit financing by PayPal. U.S. customers may choose to pay later at checkout, and may receive up to six months financing with no interest. Click the banner below for more information. (opens in a popup window) 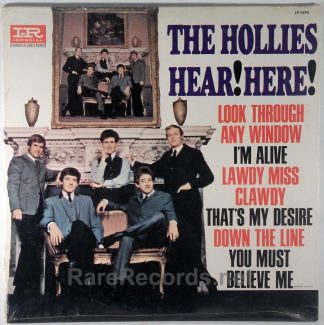