Offered for sale is a very unusual, and possibly unique, copy of Mancini Country by Henry Mancini, pressed on beautiful multicolored “splatter” vinyl.

This unusual LP came from the collection of a former RCA Records employee.

About this copy: This copy of Mancini Country was a manufacturing test pressed on multicolored vinyl, likely in 1977 or 1978.  These colored vinyl pressings were likely limited to a handful of copies and were intended for in-house use, rather than for commercial sale or for use as promotional copies.

This record came without a cover, but we’ve added one.  The cover is M- and retains the original shrink wrap.

A beautiful copy of a very unusual LP.

Background: Mancini Country was originally issued in 1970, and was a collection of country standards given the Henry Mancini instrumental touch.

In the late 1970s, RCA did some in-house experimentation by pressing a few of their titles on colored vinyl.  These were not intended for commercial release.

The best-known of these are the copies of Moody Blue by Elvis Presley, which was commercially released on blue vinyl, but for which test pressings exist in a number of other colors. That LP was released in early 1977, and this one was likely pressed about the same time. 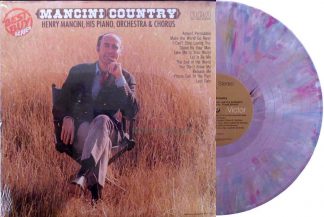