A rare original Japanese pressing of the self-titled debut LP by Frijid Pink.

Offered for sale is a rare original Japanese white label promotional pressing of the 1970 self-titled debut LP by Frijid Pink, including the original obi.

About this copy: This copy of Frijid Pink is a 1970 white label promo pressing on the Deram label.

The cover is VG++, with slight foxing and trace corner wear.

The nearly-always-missing obi is VG+, with a repaired tear at the top edge.

The lyric insert is M-.

The disc is M-, with a single spindle mark on one label.  It looks like the record may have been played once.

Background: Frijid Pink never became a household name, but their cover of “House of the Rising Sun” reached #7 on the BIllboard charts and their 1970 self-titled debut LP earned a 4 star review from Allmusic.com:

Frijid Pink’s self-titled debut album is a slashing, seriously soulful example of late-’60s Detroit rock near its best. Although they never registered with critics or rock historians the way MC5 or the Stooges did, Frijid Pink had obviously learned something in the course of two years on the road, and with Mike Valvano producing, they were able to channel the excitement of their work onto the grooves of this album very neatly….

You can listen to “House of the Rising Sun” here: 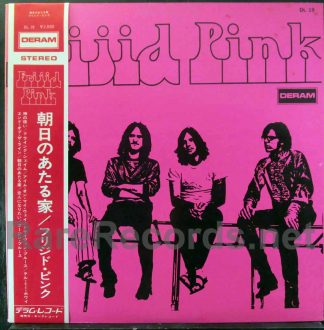