Offered for sale is a mid-1970s Dutch reissue of Hi Fi a la Espanola, by Frederick Fennell and the Eastman-Rochester “Pops” Orchestra, reissued under the title of Malaguena and Other Favorites.

About this copy: The vinyl is beautiful and quiet, grading VG++ with just a couple of scuffs on side one keeping it from M-.  The cover is VG++, with just traces of wear at the corners and a couple of small bends on the corners.

The original pressings on Mercury are nice, but are impossibly rare and surprisingly noisy when you can find one.  This copy is very quiet and very affordable.  If you want to find out what all the fans of this album are excited about without spending a fortune, this is the copy for you.

Background: One of the most eagerly sought after light classical recordings is the album, Hi Fi a la Espanola, by Frederick Fennell and the Eastman-Rochester “Pops” Orchestra.  The original pressings, released by Mercury in 1958, have sold for as much as $2000 to audiophiles, who particularly revere the track, “Brazilian Sleigh Bells.”

Until reissued by Classic Records, this album had been out of print for decades, save for this obscure reissue by Mercury’s Dutch affiliate in their Mercury’s Golden Imports series.

The copy offered for sale here is titled Malaguena and Other Favorites, Mercury SRI-75097 and was pressed in the mid-1970s, largely for export.  The cover clearly states that this record was “previously released by Mercury Records as SR 91044.” 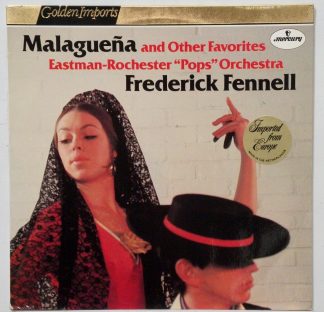