Offered for sale is a sealed promotional copy of the 1969 LP **** of the Mothers, by the Mothers of Invention.

About this copy: The copy of **** of the Mothers that we’re offering for sale is a still sealed promotional copy, with a DJ sticker attached to the front cover under the shrink wrap.  As the record is still sealed, the disc is presumably new and unplayed, and the cover is near mint.

We rarely see sealed promotional copies of albums from the 1960s, and the shrink wrap on this one is tight, with no rips, tears or holes.  You won’t find a better copy of this album anywhere.

For an example of how the label might appear, see the example photo above.

A great copy of a Zappa album that’s nearly impossible to find in this condition.

Background: After Frank Zappa’s contract with Verve Records expired in 1969, he and his band, the Mothers of Invention, moved to Warner Brothers Records, where they were given a bit more autonomy.  Of course, as record companies like to do, the jilted Verve Records decided to release no fewer than three compilation albums by the Mothers within the first year of the band leaving the label – The Mothers of Invention, Mothermania, and **** of the Mothers, sometimes called The Worst of the Mothers, which is the album we’re listing here.

Regardless of the title, or lack of one, the album consisted of tracks from the first three Mothers albums: Freak Out!, Absolutely Free, and We’re Only In It For the Money.  The album was compiled by the label without any input from Frank Zappa, who by that time had moved on to other things at Warner Brothers.

Tracks on the album are: 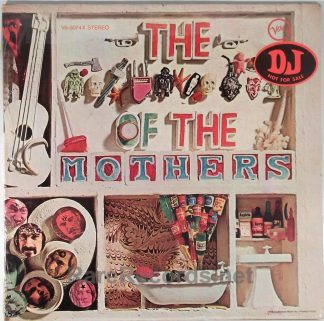