An original Japanese pressing of the 1970 LP Weasels Ripped My Flesh by Frank Zappa and the Mothers of Invention, including the original obi.

Offered for sale is a Japanese pressing of Weasels Ripped My Flesh by Frank Zappa and the Mothers of Invention, including the original obi and lyric insert.

About this copy: This copy of Weasels Ripped My Flesh is a Japanese second issue of an album that was originally released in 1970, with a ¥2300 price on the cover and obi (the original issue had a ¥2000 price).

The cover is VG++ and very close to M-, with trace corner and edge wear.  The obi is VG++, with a small fold near the top.

The lyric insert is VG++ with a couple of minor wrinkles.

The disc is M- and looks unplayed.  Beautiful disc!

A terrific copy of a very rare Frank Zappa LP, as his albums sold quite poorly in Japan.

Background: Released in 1970, Weasels Ripped My Flesh was the tenth album by Frank Zappa and the Mothers of Invention.

The album reached #189 on the U.S. album charts, though it did much better in the UK where it peaked at #28.

A fascinating collection of mostly instrumental live and studio material recorded by the original Mothers of Invention, complete with horn section, from 1967-1969, Weasels Ripped My Flesh segues unpredictably between arty experimentation and traditional song structures. … Weasels can make for difficult, incoherent listening, especially at first. But there is a certain logic behind the band’s accomplished genre-bending and Zappa’s gleefully abrupt veering between musical extremes; without pretension, Zappa blurs the normally sharp line between intellectual concept music and the visceral immediacy of rock and R&B. Zappa’s anything-goes approach and the distance between his extremes are what make Weasels Ripped My Flesh ultimately invigorating; they also even make the closing title track — a minute and a half of squalling feedback, followed by applause — perfectly logical in the album’s context. 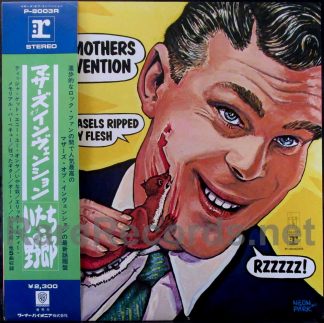