A Japanese pressing of The Grand Wazoo by Frank Zappa and the Mothers of Invention, including the original obi.

Offered for sale is a Japanese pressing of The Grand Wazoo by Frank Zappa and the Mothers of Invention, including the original obi.

About this copy: This copy of The Grand Wazoo is a Japanese second issue of an album that was originally released in 1972, with a ¥2300 price on the cover and obi (the original issue had a ¥2000 price).

The cover is VG+, with slight wear along the spine and a repaired 1/2″ split at the top of the cover near the mouth.  There is a ¥2300 sticker over the original ¥2000 price on the back cover.

The disc is M- and looks unplayed.  Beautiful disc!

A terrific copy of a very rare Frank Zappa LP, as his albums sold quite poorly in Japan.

Background: Released in November, 1972, The Grand Wazoo was the sixteenth album by Frank Zappa and the Mothers of Invention.

The album did not chart in either the U.S. or the UK.

Like its immediate predecessor, Waka/Jawaka, The Grand Wazoo was a largely instrumental jazz rock album recorded during Frank Zappa’s convalescence from injuries sustained after being pushed off a concert stage. … The instrumentation is somewhat unique in the Zappa catalog as well, with the band more of a chamber jazz orchestra than a compact rock unit; over 20 musicians and vocalists contribute to the record. While Hot Rats is still the peak of Zappa’s jazz-rock fusion efforts, The Grand Wazoo comes close, and it’s essential for anyone interested in Zappa’s instrumental works. 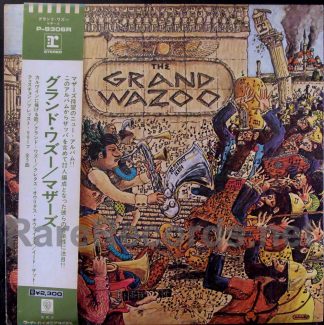 You're viewing: Frank Zappa/Mothers of Invention – The Grand Wazoo Japan LP with obi $250.00
Add to cart