A still sealed pressing of Fillmore East June 1971 by Frank Zappa and the Mothers of Invention.

Offered for sale is a rare still sealed pressing of Fillmore East, June 1971 by Frank Zappa and the Mothers of Invention.

About this copy: This is a still sealed pressing of the 1971 LP.  As the album is sealed, the record is presumably new and unplayed.

The shrink wrap is fully intact, with no rips or tears.  There is a tiny bend in the upper right hand corner.

Label variation is unknown; this LP may have blue Bizarre labels or it may have brown Reprise labels.

A nice copy of an album that’s almost impossible to find with a clean cover.

Background: Fillmore East, June 1971 was released in August, 1971 and was the 12th album released by Frank Zappa and/or the Mothers of Invention.

The album sold modestly, reaching #38 on the U.S. album charts.

As an enduring work, Fillmore East: June 1971 is a mixed bag, but it does represent the peak of the Flo & Eddie edition of the Mothers. Most of the songs are essentially comedy routines set to music…Whether one considers the results funny and parodic or crass and pandering, the band is undeniably good, especially as showcased on “Little House I Used to Live In,” “Willie the Pimp, Pt. 1,” and “Peaches en Regalia.”

While Japanese buyers were often enthusiastic fans of American popular music, they didn’t seem to be too fond of Frank Zappa or the Mothers of Invention, and all of Zappa’s albums that were released in Japan sold quite poorly. 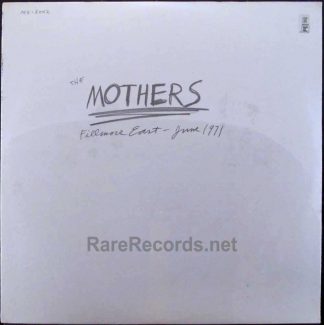