An original UK stereo pressing of Four Tops Live! by the Four Tops.

Offered for sale is an original stereo UK pressing of Four Tops Live! by the Four Tops.

About this copy: This copy of Four Tops Live! is an original UK stereo pressing on the EMI/Tamla/Motown label.

This is an early pressing with “H” and “L” stampers, indicating that it was among the first few thousand copies pressed.

The cover is VG+,with slight ring wear on the back cover and a small number “2” written in pen in the lower left hand corner.

The disc is M- and appears to have only been played a couple of times.

A beautiful copy of a terrific LP.  The 1960s UK pressings of Motown LPs tend to sound quite a bit better than the U.S. pressings.

Background: Released in 1966, Four Tops Live! was the first live album by the Four Tops.

One of the few live albums that really conveys the flavor of the group without sacrificing performance quality. The Four Tops’ stage shows have always been among the most participatory and enjoyable of any R&B or soul group, and that was clearly the case on this release. 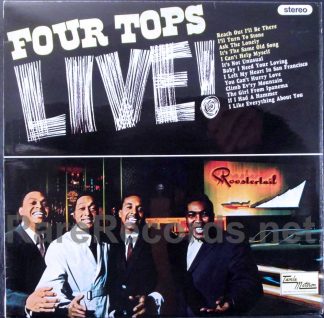