An original Japanese white label promotional copy of Night Shift by Foghat, including the original obi.

Offered for sale is an original Japanese white label promotional copy of Night Shift by Foghat, including the original obi.

About this copy: This copy of Night Shift is an original 1976 Japanese pressing on the Warner Brothers label.

The cover is VG+, with slight ring wear.  There’s a sticker attached to the cover that says “Sample” in both English and Japanese.

The obi and insert are M-.

A nice copy of a rare Foghat LP.

Background: Released in 1976, Night Shift was the sixth album by Foghat.  The album reached #36 on the U.S. charts and was certified gold by the RIAA.

After hitting it big in the arena rock sweepstakes with Fool for the City, Foghat continued along the same lines on 1976’s Night Shift. This time, ex-Edgar Winter sideman Dan Hartman took the producer’s chair. The result is a well-produced and solid hard rock album that nonetheless feels disappointing because it lacks the consistently high levels of energy and inspiration that marked its predecessor. This time, the hard rocking highlights included the title track, a powerhouse tune built on a strong combination of an ascending guitar riff and rumbling bassline, and “Drivin’ Wheel,” an automobile-themed slab of boogie rock that glides along on a stomping, cymbal-accented beat and plenty of fat power chords. … Foghat enthusiasts should probably sample Night Shift’s highlights on a compilation before deciding whether or not to pick it up. 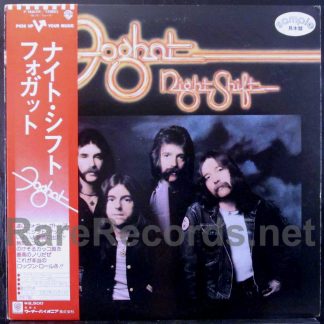