An original 1977 Japanese pressing of Rumours by Fleetwood Mac, including the original obi.

Offered for sale is a Japanese first pressing of Rumours by Fleetwood Mac, including the original obi.

About this copy: This copy of Rumours is a rare 1977 Japanese first pressing of an album that was issued four times on vinyl in that country.

Unlike later pressings, the first Japanese issue was pressed from American stampers, with the words “Mastered by Capitol” stamped in the dead wax.

The cover is M-.  The obi is M- with no tears, but a minor fold on the back.  Both the English and Japanese inserts are M-.

The disc looks M-, but plays with a slight amount of surface noise, mostly at the beginning of each side.

Background: Released in 1977, Rumours was the album that turned Fleetwood Mac into superstars.  The album reached #1 in the U.S. and in the UK and has sold more than twenty million copies in the U.S. alone.

Rumours is the kind of album that transcends its origins and reputation, entering the realm of legend — it’s an album that simply exists outside of criticism and outside of its time, even if it thoroughly captures its era. Prior to this LP, Fleetwood Mac were moderately successful, but here they turned into a full-fledged phenomenon, with Rumours becoming the biggest-selling pop album to date. While its chart success was historic, much of the legend surrounding the record is born from the group’s internal turmoil. Unlike most bands, Fleetwood Mac in the mid-’70s were professionally and romantically intertwined, with no less than two couples in the band, but as their professional career took off, the personal side unraveled. 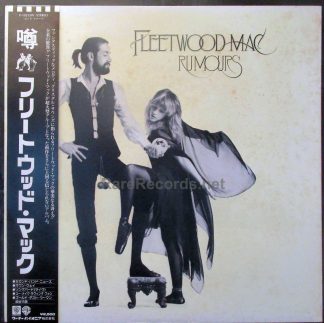