An original U.S. white label promotional copy of Pictures at an Exhibition by Emerson, Lake & Palmer.

Offered for sale is an original stereo U.S. white label promotional copy of Pictures at an Exhibition by Emerson, Lake & Palmer.

About this copy: This copy of Pictures at an Exhibition is a 1972 white label promo copy on the Cotillion label.

The cover is VG+, with a bit of general wear and two stickers – an orange promotional sticker and a black hype sticker,

The disc is VG++, with just a few faint scuffs, likely from the original inner sleeve (included.) The disc has clearly only had a couple of plays.

A nice copy of a promotional LP that is usually found in terrible condition.

Background: Released in late 1971, Pictures at an Exhibition was Emerson, Lake & Palmer’s first live album, and their only live album to consist entirely of material that was not found on their studio albums.

Allmusic.com gave Pictures at an Exhibition a 3 1/2 star review:

One of the seminal documents of the progressive rock era, a record that made its way into the collections of millions of high-school kids who never heard of Modest Mussorgsky and knew nothing of Russia’s Nationalist “Five.” It does some violence to Mussorgsky, but Pictures at an Exhibition is also the most energetic and well-realized live release in Emerson, Lake & Palmer’s catalog, and it makes a fairly compelling case for adapting classical pieces in this way. 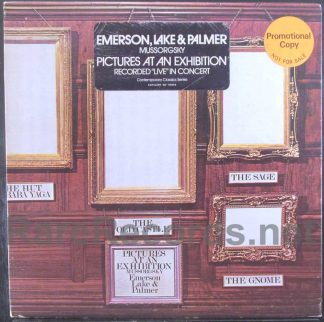