Note: The red vinyl copies of Empty Sky are quite rare, as they were issued only as promotional items for radio use, where production may have been limited to as few as 100 copies.  All copies pressed for sale in record stores were black vinyl.

About this copy: This copy of Empty Sky is an original 1970 Japanese white label promo copy on the DJM label, pressed on “Everclean” red vinyl.

The cover is VG++, with slight wear at the corners and edges.  There is a bit of foxing on the inside of the gatefold cover.

The obi is VG+, with a few minor wrinkles and a bit of wear at the top and bottom edges.  The “hojyuhyo,” or reorder tag, has been removed.

Both the cover and the obi are the correct ones for this issue, with the ¥2000 price.  The second issues were priced at ¥2200.

The original lyric insert and envelope-style inner sleeve are included.

The red vinyl white label promo disc is M- and looks unplayed.  There’s a bit of foxing on the labels.  Beautiful disc!

A gorgeous copy of a very rare Elton John item and one of the world’s rarest Elton John LPs.

Background:  Empty Sky was the first solo album by Elton John.  The LP was released in June, 1969 in the UK, and in September, 1970 in Japan.  The album did not chart in either country.

The album was not released in the United States until January, 1975, (with a different cover) though it did eventually reach #6 on the U.S. charts.

No singles were released from the album. 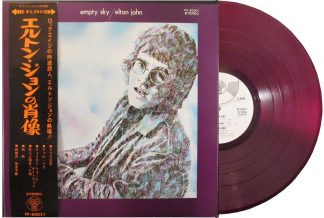