A Japanese pressing of Whisper Not by Ella Fitzgerald, including the original obi.

Offered for sale is a Japanese pressing of Whisper Not by Ella Fitzgerald, including the original obi.

This copy was part of an early-1980s export series; the albums were manufactured in Japan but the cover lists the U.S. address of the record company and the LP includes a different obi from the one used on the copies sold in Japan.

About this copy: This copy of Whisper Not is a 1981 Japanese pressing of an album originally released in 1966.

A beautiful copy of a nice Ella Fitzgerald LP.

Background: Released in 1966, Whisper Not was the second-to-last LP that Ella Fitzgerald recorded for Verve.

Whoever decided to put pianist Marty Paich and Ella Fitzgerald together in the studio in 1966 deserves a bit of credit for the great music on Whisper Not. Together, Fitzgerald and Paich deliver a dozen beautifully sung, carefully arranged standards. An orchestra tastefully backs Fitzgerald’s vocals, offering cushy support without overdoing it. … Whisper Not captures two intelligent artists working toward a common goal and creating beautiful music in the process. 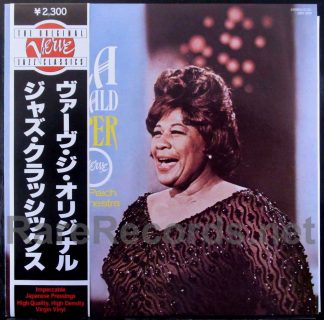 You're viewing: Ella Fitzgerald – Whisper Not Japan LP with obi $40.00
Add to cart