A rare first pressing of the 1975 fusion LP by Texas band The Electromagnets, featuring Eric Johnson

Offered for sale is a copy of the only album by the Austin, Texas-based band, The Electromagnets, featuring Eric Johnson on guitar.

About this copy: The copy of Electromagnets offered for sale is the second pressing of the 1975 LP with the red/black cover and the dark blue EGM label.

The cover is VG with general wear.

The disc is M-, with a couple of very faint sleeve scuffs.

A terrific copy of a rare pressing of Eric Johnson’s only commercially released recordings from the 1970s.

Background: After being a well-kept secret for nearly two decades in Texas, Eric Johnson finally broke through in a big way with his 1990 LP, Ah Via Musicom. Featuring catchy tunes and incredible, lightning-fast guitar work, Johnson finally became known to music fans in general, rather than just the guitar players who had been following him forever.  Unfortunately, Johnson seems to be a bit of a perfectionist, and as such, he hasn’t released a whole lot of material during his 40+ years as a recording artist.

The first album on which he played, Perpetuum Mobile, by an Austin band called Mariani, was limited to 100 copies and never turns up for sale.  The second album, by the fusion band The Electromagnets, was privately pressed and when it was released in 1975, was almost impossible to find outside of Texas when new.

Electromagnets are best known as the launching ground for Eric Johnson, one of the great guitarists of the ’80s and ’90s. Johnson was known for his clear tones and amazing technical skill — two things that are apparent on the Electromagnets’ first and only album. The group followed the path of such trailblazing fusion groups as the Mahavishnu Orchestra, creating an amalgam of rock, jazz, blues and the avant-garde. Unlike many of their peers, the Electromagnets were loose, letting themselves bend the beat and have fun. As a result, their album is more enjoyable than most ’70s fusion records… Johnson stands out with his crystal clear guitar and tasteful solos. His presence makes Electromagnets the curiosity it is, but also makes it more than an odd historical item.

You can hear a track from the album, Hawaiian Punch, below: 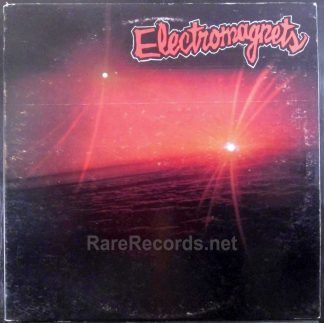