A promotional copy of the limited edition half speed mastered pressing of Powerlight by Earth, Wind, & Fire.

Offered for sale is a promotional copy of the scarce limited edition half speed mastered “Mastersound” pressing of Powerlight by Earth, Wind & Fire.  This title is the hardest Earth, Wind & Fire LP to find in the Mastersound series, and it might be the best-sounding one, too.

About this copy: This copy of Powerlight is a half speed mastered pressing, issued in 1983 shortly before Columbia Records discontinued their Mastersound audiophile series.

The cover is VG++, with a bit of wear at the corners.  The cover has a promotional stamp on the back cover.  The custom insert is included.

The disc is M- and looks as though it may be unplayed.

Background: Powerlight, released in 1983, was the twelfth album by Earth, Wind & Fire.  It reached #12 on the U.S. album charts, helped by the single “Fall in Love With Me.”

Many groups lose the steam that propelled them to the top; Earth, Wind & Fire, contemporary sound and all, were still blazing when this album was released. “Fall in Love With Me” was the first single. With its festive rhythm and sauntering vocals, it became a number four hit on the Billboard R&B charts and a number 17 pop hit. … Throughout the entire album, White’s unifying message is fueled by the aggressive rhythms and relaxing melodies.
This particular pressing was part of Columbia Records’ short-lived (1980-1983) audiophile series, in which they released a number of then-new and vintage titles in high-quality, half speed mastered editions in order to compete with Mobile Fidelity and Nautilus. These records were mastered with both the tape deck and the cutting lathe running at half speed, which produces deeper bass and better imaging than standard pressings. In addition, these records, which sold for a substantial premium over the regular pressings of the album, were pressed on high quality virgin vinyl. Mobile Fidelity’s audiophile pressings are better known than those from Columbia, but Columbia’s half speed mastered pressings are, for the most part, exceptionally good ones, and this album is no exception. 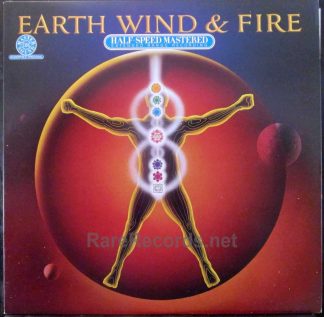