View cart “Earth Wind & Fire – I Am 1981 half speed mastered LP promo copy” has been added to your cart.

A promotional copy of a limited edition half speed mastered pressing of I Am by Earth, Wind & Fire.

Offered for sale is a promotional copy of a limited edition half speed mastered pressing of I Am by Earth, Wind & Fire, issued in 1981.

About this copy: This copy of I Am is a limited edition pressing in Columbia’s “Mastersound” series.

The cover is VG+, with slight wear at the edges and corners.  The custom insert is included.

A nice copy of a great-sounding LP.

Background: Released in 1979, I Am was the ninth LP by Earth, Wind & Fire.  The album reached #3 on the U.S. album charts and #5 in the UK, helped by the singles “Boogie Wonderland” and “After the Love Has Gone.”

Allmusic.com gave I Am a 3 star review:

Disco was at the height of its popularity in 1979, when Earth, Wind & Fire responded with its most disco-influenced single ever, the glossy and infectious “Boogie Wonderland.” …Though not in a class with That’s the Way of the World, Spirit, or All ‘n All, I Am is a rewarding album that has a lot going for it.

This particular pressing was part of Columbia Records’ short-lived (1980-1983) audiophile series, in which they released a number of then-new and vintage titles in high-quality, half speed mastered editions in order to compete with Mobile Fidelity and Nautilus. These records were mastered with both the tape deck and the cutting lathe running at half speed, which produces deeper bass and better imaging than standard pressings. In addition, these records, which sold for a substantial premium over the regular pressings of the album, were pressed on high quality virgin vinyl. Mobile Fidelity’s audiophile pressings are better known than those from Columbia, but Columbia’s half speed mastered pressings are, for the most part, exceptionally good ones, and this album is no exception. 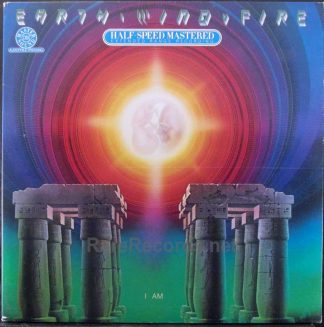