A scarce pressing of the Japan-only LP Dollie’s Diary by the Norwegian pop duo Dollie, complete with obi.

Offered for sale is a copy of the 1983 Japan-only LP Dollie’s Diary by Dolly.

About this copy:  The cover, disc and obi are M-, though there is the beginning of a split on the spine.  The record appears to be unplayed.  The lyric insert is included.

Like a lot of early 1980s European groups, they had a sound that was similar to that of Abba.

While they released a number of albums in Europe, the 1983 LP Dollie’s Diary appears to have been released only in Japan.

You can listen to “Adieu Monsieur” here: 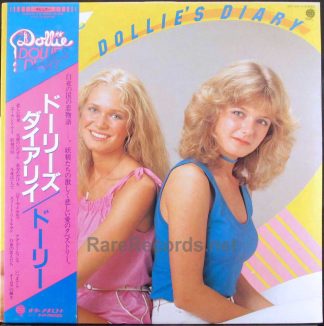