An original Japanese red vinyl white label promotional copy of the 1970 LP Sit Down Old Friend by Dion, including the original obi.

Offered for sale is a rare red vinyl white label promotional copy of Sit Down Old Friend by Dion, including the original obi.

On this title, the red vinyl pressings may have been limited to promotional copies.  We’re not sure, because the album is so rare that we’ve only seen one other copy ever, and it was also a red vinyl white label promo.

As this album was issued in Japan as Warner Brothers was switching their distribution from Toshiba to Pioneer, it’s also possible that stock copies of this album don’t exist.  We really don’t know.

About this copy: This copy of Sit Down Old Friend is an original 1970 pressing on the Warner Brothers label.

The cover is M- on the front and VG+ on the back, with a bit of foxing.

The obi is VG, with a number of wrinkles and foxing on the back, but no tears.  The “hojyuhyo,” or reorder tag, is still attached.

There is no lyric insert.  It likely included one when new, but we really don’t know.  The plain white plastic-lined inner sleeve that was used only with promotional copies is included.

A terrific copy of a very rare Dion LP.  Pretty good record, too.

Background: Released in 1970, Sit Down Old Friend was the eighth solo album by Dion MiMucci, and his first album for Warner Brothers.

The album did not chart in any country.

Dion’s first Warner Bros. album and his first album of the 1970s was a change of pace even by the standards of his mellower, folk-rockish late-’60s comeback records. Sit Down Old Friend was Dion unplugged: just him on acoustic guitar (both classical and steel string), and no other accompaniment, with all but three of the songs written or co-written by the singer. There’s an intimate warmth and vulnerability here associated with demos that aren’t typically issued in this original form, instead being embellished and worked over into something slicker. … It’s a quality, overlooked effort of the early singer/songwriter era, though it’s missing any classic or hitbound tunes that might have made it a major work.

You can listen to the album’s only single, “If We Only Have Love,” here: 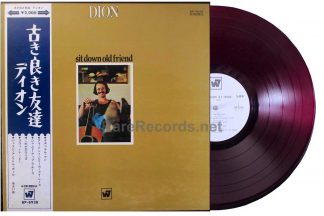