About this copy: The cover is VG+, with a bit of wear at the corners. The brown vinyl disc is VG+ on one side, and VG on the other, as it has a line of small marks across side one that appear to be a manufacturing defect, rather than evidence of being mistreated.

In fact, the record appears to have had very little play.  The record plays quite well with minimal surface noise.  There is a break in the side two label, as can be seen in the photos.

A beautiful copy of an extraordinarily rare 1960s pop LP, and possibly the only brown vinyl copy in existence.

Background: We first saw a green vinyl copy of Runaround Sue offered for sale in 1978 and described as a “promo.”  That led us to believe that there were probably quite a few of them out there, but over the nearly 40 years since, we’ve only seen three other copies for sale, and none of them were marked as a promotional copy in any way.

It’s more likely that they were pressed by a record company employee without authorization, as promotional needs would have warranted pressing far more copies than the handful we’ve seen for sale.

In addition, we had been unaware of any other colored vinyl LPs on the Laurie label, which suggests that this was simply a one-time thing done by someone at the pressing plant.

It turns out that there is at least one other colored vinyl LP on the Laurie label – this one.

This copy of Runaround Sue is even more unusual than the green vinyl copies, in that it has been pressed on translucent brown vinyl.  We’ve never heard of another copy; this copy may be a unique, one of a kind item.

Without a doubt, this is one of the rarest pop records of the 1960s, and it’s a pretty good record, too.  Voters at Allmusic.com give the album 4 1/2 stars, and Dion, who is still active, was elected to the Rock and Roll Hall of Fame in 1989. 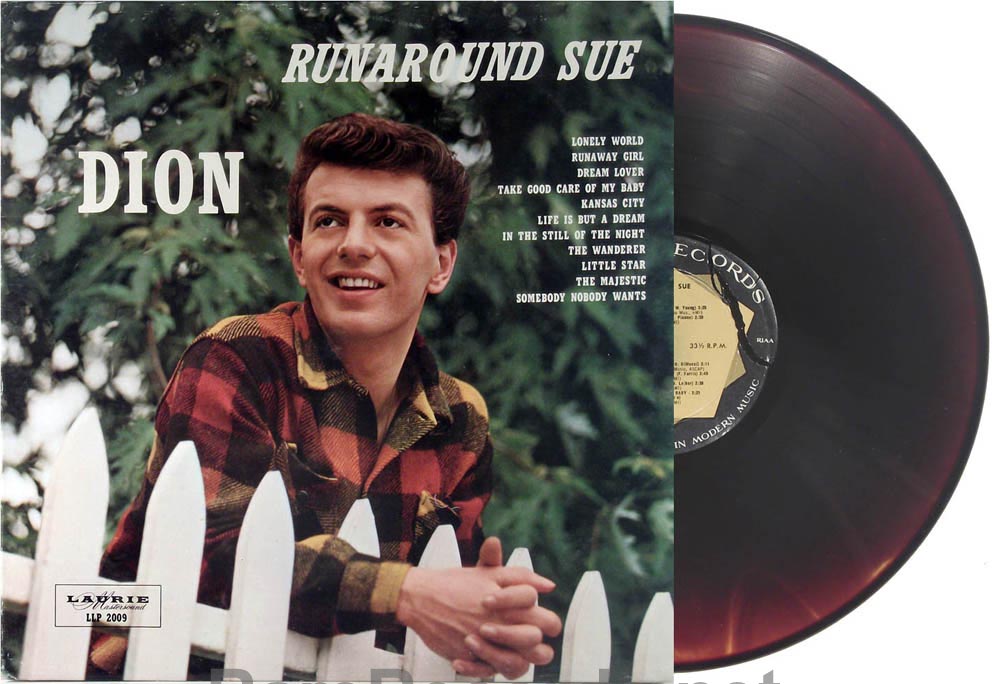