An original Japanese pressing of Stormbringer by Deep Purple, complete with original obi.

Offered for sale is an original Japanese pressing of Stormbringer by Deep Purple, complete with the original obi.

About this copy: This copy of Stormbringer is a Japanese first pressing on the Warner Brothers label.

The cover is VG+, with faint general wear, especially at the edges.

The obi is VG++, with a bit of foxing and a few minor wrinkles.  The “hojyuhyo,” or reorder tag, is attached.

The lyric insert is included.  This copy does not include the poster.

The disc is VG+, with a few minor scuffs.  The record has a number of spindle marks on the label, but has been well cared for.

A nice copy of an album that’s fairly hard to find as a Japanese pressing.

Background: Released in 1974, Stormbringer was the ninth studio album from Deep Purple, and their second to feature singers David Coverdale and Glenn Hughes.

Stormbringer falls short of the excellence of Machine Head and Who Do We Think We Are, but nonetheless boasts some definite classics — including the fiery “Lady Double Dealer,” the ominous title song (a goth metal treasure), the sweaty “High Ball Shooter,” and the melancholy ballad “Soldier of Fortune.” 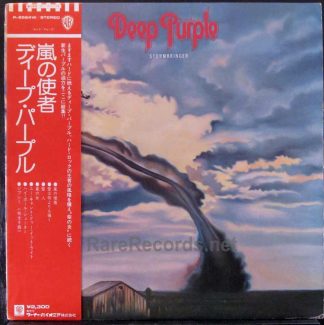