View cart “Bob Dylan – The Times They Are A-Changin’ sealed Mobile Fidelity LP” has been added to your cart.

Offered for sale is an early 1970s Japanese pressing of Fireball by Deep Purple, complete with original obi.

About this copy: This copy of Fireball is a Japanese second issue, which probably came out in 1974 or so.  It has the same catalog number as the original 1971 release, but has the “Burbank” label, rather than the solid green label from the first issue.

The cover is VG++, with faint wear at the corners and edges.  The obi is VG++, with a bit of foxing.  The “hojyuhyo, ” or reorder tag, is still attached.

The lyric insert is included; someone has written a date at the bottom of it in ballpoint pen.

The disc is M- and appears to have had very little play.

Background: Fireball was the fifth studio album from Deep Purple.  Released in 1971, the LP reached only #32 in the U.S. but reached #1 in the UK, helped by the single, “Strange Kind of Woman.”

One of Deep Purple’s four indispensable albums (the others being In Rock, Machine Head, and Burn), 1971’s Fireball saw the band broadening out from the no-holds-barred hard rock direction of the previous year’s cacophonous In Rock. Metal machine noises introduced the sizzling title track — an unusually compact but explosively tight group effort on which Jon Lord’s organ truly shined. …Sure, the following year’s Machine Head would provide Deep Purple with their commercial peak, but on Fireball, the formidable quintet was already firing on all cylinders. 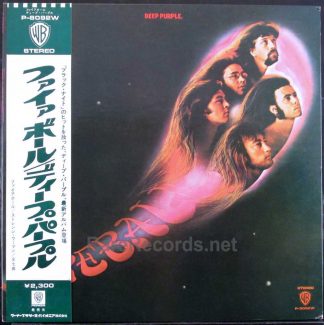