A 1976 Japanese pressing of Burn by Deep Purple, complete with original obi.

Offered for sale is a Japanese pressing of Burn by Deep Purple, including the original obi.

About this copy: This copy of Burn is a 1976 Japanese issue of an LP that was originally released in 1974.

The cover is VG++, with faint wear, mostly at the corners and edges.  Obi and insert are M-.

The disc is M- and has a single spindle mark on each label.  It looks like it might have been played once.

A beautiful copy of a hard rock classic, and one of our favorite LPs.

Background: Released in 1974, Burn was the eighth studio album by Deep Purple.  The album marked a change in sound for the band, as singer Ian Gillian and bassist Roger Glover had been replaced by David Coverdale and Glenn Hughes.

The album reached #3 in the UK and #9 on the U.S. charts, and is today regarded as one of the band’s best efforts.

Although it shook the band’s fan base to its core, the acrimonious departure of vocalist Ian Gillan and bassist Roger Glover served to rejuvenate Deep Purple in time for 1973’s aptly named Burn album, which unquestionably showed huge improvement over their lackluster previous effort, Who Do We Think We Are. And in an interesting twist rarely attempted before or since, new recruits David Coverdale (vocals) and Glenn Hughes (bass and vocals, ex-Trapeze) traded lead singing duties on virtually every one of its songs — an enviable tag team, as both possessed exceptional pipes…. Like the vast majority of Burn (Mistreated’s) greatness qualifies it for the highest echelons of hard rock achievement, and therefore ranks as an essential item in the discography of any self-respecting music fan. 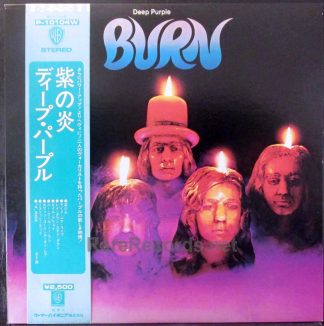