About this copy:  This copy of Creedence Clearwater Revival is a white label promo copy of the first issue of the album, with the rare cover that does not have the red blurb that says “Includes Suzie-Q.”

The cover is M- and still has the original shrink wrap.  There is trace wear at the two right hand corners, and a bit of a bend along the spine.

The disc is VG++, and very close to M-.  There are a couple of faint scuffs from being removed from the original inner sleeve and a couple of spindle marks on the labels.   Gorgeous disc!

The disc most likely has been played only a handful of times.

A beautiful copy of a rock classic, and likely your final upgrade.

Background: Released in July, 1968, Creedence Clearwater Revival was the debut LP by the band of the same name.  While the album only reached #52 on the U.S. album charts, it was eventually certified platinum by the RIAA, helped by the single “Suzie Q,” which reached #11 on the U.S. singles charts.

Released in the summer of 1968 — a year after the summer of love, but still in the thick of the Age of Aquarius – Creedence Clearwater Revival’s self-titled debut album was gloriously out-of-step with the times, teeming with John Fogerty’s Americana fascinations. While many of Fogerty’s obsessions and CCR’s signatures are in place — weird blues (“I Put a Spell on You”), Stax R&B (Wilson Pickett’s “Ninety-Nine and a Half”), rockabilly (“Susie Q”), winding instrumental interplay, the swamp sound, and songs for “The Working Man” — the band was still finding their way. Out of all their records (discounting Mardi Gras), this is the one that sounds the most like its era, thanks to the wordless vocal harmonies toward the end of “Susie Q,” the backward guitars on “Gloomy,” and the directionless, awkward jamming that concludes “Walking on the Water.” 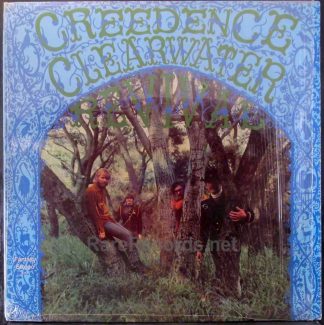