A sealed copy of the Classic Records 4 LP 45 RPM reissue of Chabrier by the Detroit Symphony.

Offered for sale is a sealed copy of the 4 LP, 180 gram, 45 RPM Classic Records reissue of Chabrier, performed by Paul Paray and the Detroit Symphony Orchestra, originally issued in 1960 by Mercury Records as SR90212.

About this copy: This copy is a still sealed limited edition reissue from Classic Records, released approximately ten years ago. This set was cut at 45 RPM and pressed on four single-sided, 180 gram discs for optimum sound quality.  The first disc in the set has a printed cover that duplicates the cover used on the original Mercury pressing; the other three in the set have plain white covers.  The labels duplicate the original Mercury Living Presence labels used on the original pressing. This is an early issue, pressed on 180 gram vinyl with no mention of “Quiex”, “200 gram” or “Clarity” on the cover.

The set is still sealed and the shrinkwrap is intact with no rips or tears.  A beautiful copy of a hard to find pressing.

Background: Classic Records earned a solid reputation by reissuing long-out-of-print and highly sought out classical titles originally released by RCA, Mercury, and Columbia in the late 1950s and early 1960s.  These pressings offered great dynamics and wide, impressive soundstages.  Unfortunately, they also sold in limited numbers when new and finding mint used copies has become quite difficult.  Classic Records began reissuing many of these titles in the mid 1990s, first as 180 gram 33 1/3 LPs, and later as limited edition pressings cut at 45 RPM on multiple, single-sided discs for optimum sound quality.  Some of these titles were pressed multiple times at different weights and types of vinyl.  Later pressings note Quiex SV, Quiex SV-P, Clarity Vinyl or 200 Gram vinyl on the jackets.  Earlier, 180 gram pressings omit this.

While they don’t get the press that the RCA Living Stereo pressings do, Mercury’s Living Presence issues from the late 1950s and early 1960s can stand with the best of the classical recordings from the golden era of recording.   Chabrier, consisting of Espana, Danse Slave, Fete Polonaise, Suite Pastorale and the Gwendoline Overture, is one of the more sought-ought titles in the Mercury Living Presence series. 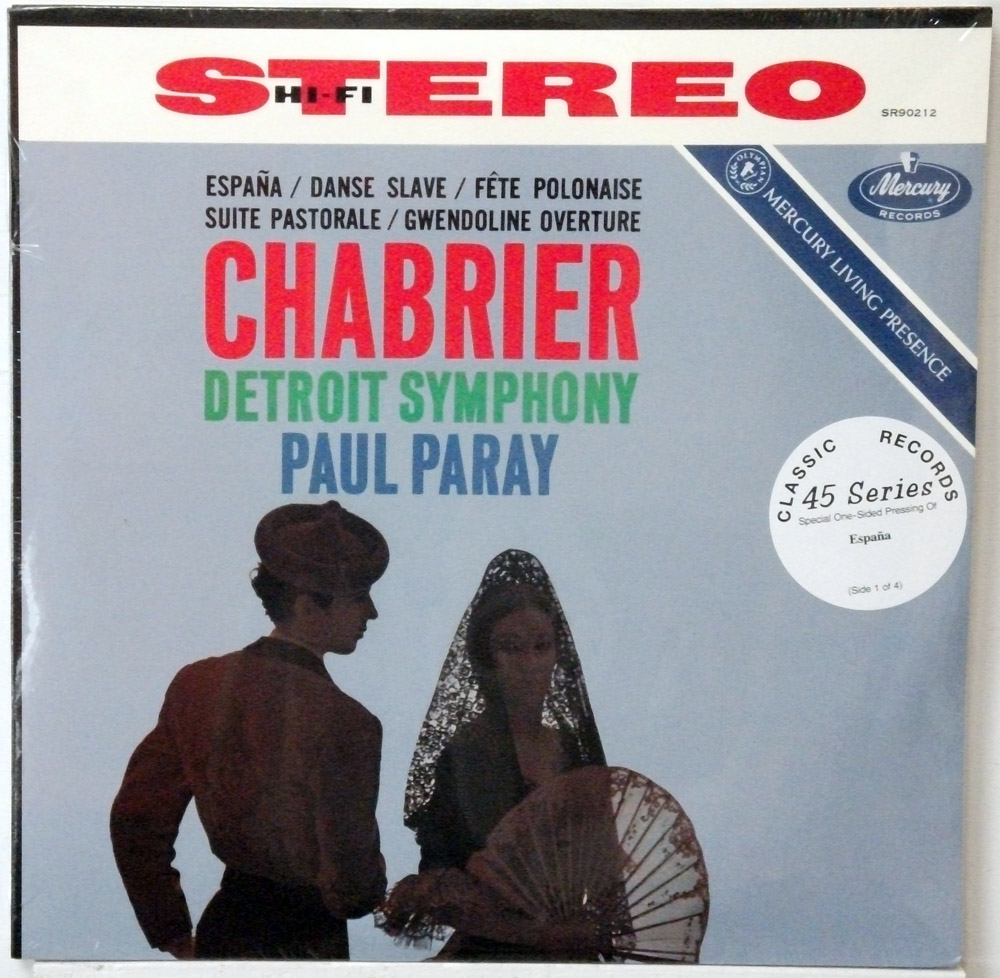