View cart “Cadillacs – The Fabulous Cadillacs 1957 U.S. doo wop LP” has been added to your cart.

A copy of the second pressing of the 1957 LP The Fabulous Cadillacs by the Cadillacs.

Offered for sale is a late 1950s second issue of the 1957 LP The Fabulous Cadillacs by the Cadillacs.

About this copy: This copy of The Fabulous Cadillacs is a second issue, on the flat-black Jubille label, probably pressed in 1958 or so.

The cover is VG+, with slight ring wear and some wear on the bottom edge.

The disc is a very clean VG+, with a few sleeve scuffs and a few very tiny marks.

Background: The Cadillacs were one of the better-selling doo wop groups of the 1950s and early 1960s, and one of the very few to release more than one album.

The Fabulous Cadillacs, released in 1957, was actually a compilation of singles that the group had released going as far back as 1953.  The album sold reasonably well for a 1950s LP, helped the well-known single “Speedoo.”

First issues of the LP were on the blue Jubilee label, followed shortly after release by a change to the flat black label.

The Cadillacs’ first album was actually like a greatest-hits compilation (leaving aside the fact that they’d had only one hit) drawing from the singles they’d released up to that point, and not material recorded specifically for LP release. That hit, “Speedoo,” is included here, naturally, as are 11 other tracks found on various A-sides and B-sides of 1954-1957 7″ releases. …The production throughout has that flashpoint of R&B, a hint of jazz, and a trace of pop that defined much early New York vocal group rock & roll.

You can listen to “Speedoo” here: 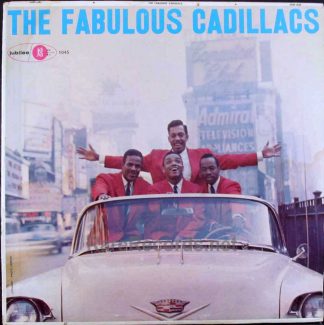