A nice mono second issue of Buddy Holly’s posthumous 1963 LP, Reminiscing, with the cover still in the shrink wrap

Offered for sale is a nice mono second issue of Buddy Holly’s posthumous 1963 LP, Reminiscing, with the cover still in the shrink wrap.

About this copy: This copy is a mono second pressing on the rainbow-colored Coral label but does still have the original shrink wrap on the cover.  That’s a huge bonus, because this record is notoriously prone to ring wear.  (see example photo.) We’re not going to claim that this copy has none, though we can’t know without removing the wrap.  That said, it’s one of the nicer covers you’re ever going to see on this LP.

A nice copy of a surprisingly good record.

Background: Buddy Holly’s death in 1959 didn’t stop Coral Records from releasing everything they could find that he’d recorded during his short time with the label and Reminiscing is one of his better posthumous efforts.

Even with Buddy Holly four years in the grave, there were “new” albums of his stuff coming out that were running circles around most of the competition, and Reminiscing was a prime example, a bluesy, hard-rocking, moody assembly of material gathered from across more than two years of Holly’s history, from among some of his last finished tracks and demos going all the way back to 1956 and extending up as late as his home-recorded demos of January 1959. Apart from “Wait ‘Til the Sun Shines, Nellie” — which he may well have done as a sentimental favorite — the main focus of the sound (overdubbed by the Fireballs under the guidance of producer Norman Petty) was rockabilly, sometimes of a very advanced kind. 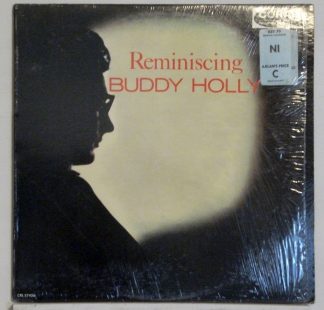