A Japanese pressing of the 1982 LP Ambient 4: On Land, by Brian Eno, complete with original obi.

Offered for sale is an original Japanese pressing of the 1982 LP Ambient 4: On Land by Brian Eno, complete with original obi.

About this copy: This copy of Ambient 4: On Land is an original Japanese issue on the Editions EG label.

The cover is VG++, with faint wear at the corners.  Included are the M- Japanese insert and two additional inserts provided by the American EG label, which distributed the LP in the U.S.

The disc is M- and appears to have had little, if any, play.

Background: Released in 1982, Ambient 4: On Land was the fourth and final album in Brian Eno’s “ambient” series.  The album did not chart in the U.S., but reached #93 in the UK.

On Land represented a significant move away from the strategies Brian Eno had employed in earlier ambient releases such as Discreet Music and Music for Airports. Instead of using a specific process to generate music with minimal interference from the composer, he here opts for a more gestural and intuitive approach, creating dreamy pictures of some specific geographical points or evocative memories of them. …On Land remains a landmark event in the genre, as well as one of its high-water marks, and sounds entirely up to date 20 years after its initial release. A superb effort. 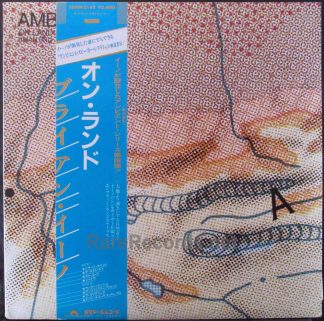