About this copy: This copy of Bye Bye Blues is a 1975 Japanese white label promo reissue of an LP that was originally released in 1966.

The cover is VG, with some general wear.  The obi is VG++, with a few wrinkles.  There is no lyric insert, though the album may not have been issued with one.

A nice copy of a pretty good LP.

Background: Bye Bye Blues, released in 1966, was Brenda Lee’s 15th studio album.  The album didn’t fare too well in the United States, reaching only #94 on the Billboard albums chart.  It did better in Britain, where it reached #21.

The album consisted mostly of uptempo songs, hence the title.

The only single from the album, “Rusty Bells,” peaked at #33 on the U.S. singles charts.

You can listen to her version of “Flowers on the Wall” here: 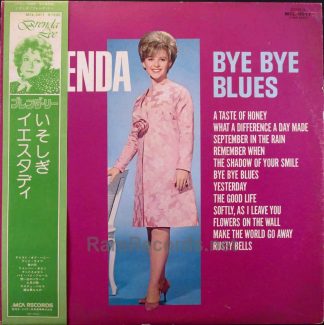