An original 1971 Japanese pressing of Manna by Bread, including the rare Now! obi.

Offered for sale is an original Japanese pressing of Manna by Bread, including the original rare “Now!” obi.

About this copy: This copy of Manna is an original 1971 Japanese pressing on the Elektra label.

A beautiful copy of an album that’s quite hard to find as a complete original issue.

Background: Released in March, 1971, Manna was the third album by Bread.

The album reached #21 on the U.S. album charts.

Bread’s third album, Manna, isn’t so much a step forward as it is a consolidation of strengths, as the group sharpens their skills and carves out their own identities. It’s clear that the rift between David Gates and Robb Royer and James Griffin is beginning to take shape, as the album is evenly divided between Gates tunes and Royer/Griffin compositions. …Yet, this is a record that is laid-back and even tempered, which isn’t a bad thing — it results in a fine listen, especially since the group’s songwriting remains at the high standard instituted on that first Bread album.

This week, all Folk and Folk Rock LPs are on sale!
Gift Cards Now Available! 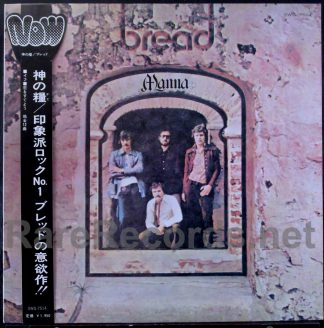