A scarce copy of Great White Wonder by Bob Dylan on the Trademark of Quality label, pressed on orange and blue vinyl.

Offered for sale is a copy of the 2 LP set Great White Wonder by Bob Dylan, pressed on orange and blue vinyl and issued by the Trademark of Quality label.

About this copy:  This copy of Great White Wonder is a later pressing on the Trademark of Quality label, and features the “smoking pig” labels.

The cover is a plain white cover, and is completely unmarked – no title, no sticker.  The cover is VG+, with slight ring wear.  The original insert with track listings and titles is included.

Disc 2 (orange vinyl) – Disc is M- and looks unplayed.  There are a couple of round marks on the label.

A nice copy of a classic album that’s hard to find on colored vinyl.

Background: Great White Wonder was one of the first “underground” LPs to be issued on the market, originally reaching stores in mid-1969 in plain white covers.  The album contained early studio outtakes and collaborations with The Band from 1967.

The album was originally packaged in a plain white cover with no identification on it at all, and it became a surprise best-seller and spawned the popular and collectible Trademark of Quality label.  The album had numerous repressings over the years and was issued with a variety of covers and a few of the pressings were colored vinyl.

Tracks on the 2 LP set are: 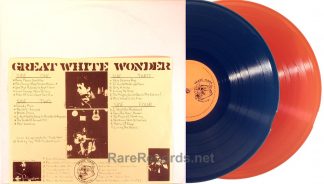