Bob Dylan – Another Side of Bob Dylan sealed 1965 stereo LP

A 1965 stereo pressing of Bob Dylan’s Another Side of Bob Dylan, with the record still sealed in the inner sleeve.

Offered for sale is a sealed stereo copy of Bob Dylan’s fourth LP, Another Side of Bob Dylan, with the record still sealed in the plastic inner sleeve.

About this copy: This copy of Another Side of Bob Dylan is a still sealed 1965 stereo pressing of an album that was originally released in August, 1964.  This copy has a label that has the words “360° Stereo” in white, rather than the black lettering used on the original (and fairly rare) 1964 issue.

While the seal on the shrinkwrap has been broken, the record is still sealed in the original perforated polyethylene inner sleeve; it is presumably new and unplayed.  The cover retains its original shrink wrap.  The wrap is fully intact with no rips, tears or holes, and the cover has no cutout marks, saw marks, holes,  or bends.

If you’re looking for a really nice early stereo pressing of this iconic LP, this is as nice a copy as you’re ever likely to find.

Background: Bob Dylan’s fourth album, the 1964 LP Another Side of Bob Dylan, contains some of his best known songs:  All I Really Want to Do, It Ain’t Me, Babe, Chimes of Freedom, and My Back Pages among them.  While failing to chart as highly as his previous two albums, it did sell well at the time of release.  As was common in the 1960s, this LP was released in both mono and stereo, with mono pressings being phased out in early 1968.

While the album was released in both formats, pressings from the 1960s are far more common in mono than they are in stereo, as most records sold at the time were mono pressings.  We’d guess that mono copies of early issues of this album outsold their stereo counterparts by a ratio of at least 5:1, making early stereo pressings relatively rare.

AllMusic gave Another Side of Bob Dylan a 5 star review:

The other side of Bob Dylan referred to in the title is presumably his romantic, absurdist, and whimsical one — anything that wasn’t featured on the staunchly folky, protest-heavy Times They Are a-Changin’, really. Because of this, Another Side of Bob Dylan is a more varied record and it’s more successful, too, since it captures Dylan expanding his music, turning in imaginative, poetic performances on love songs and protest tunes alike. … The result is one of his very best records, a lovely intimate affair. 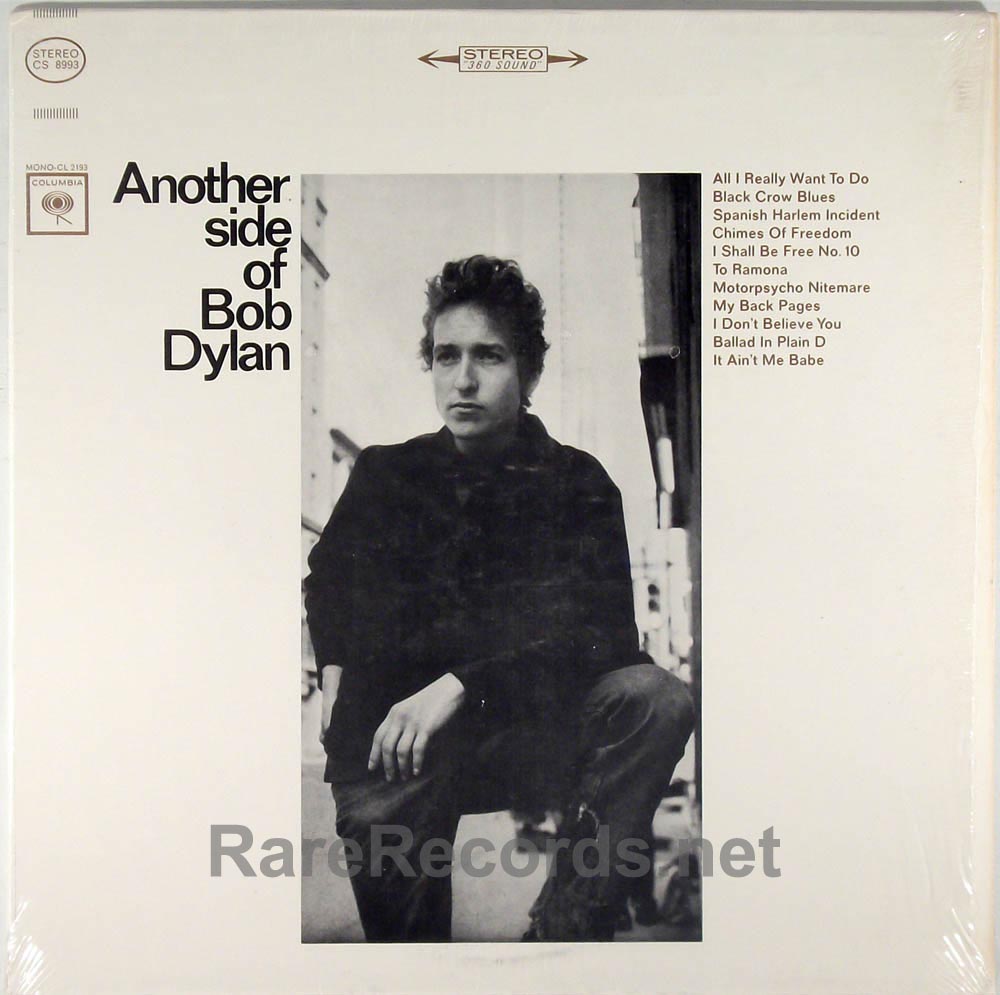