An original U.S. stereo pressing of the 1966 LP Live at the Cafe Au Go Go by the Blues Project.

Offered for sale is an original U.S. pressing of the 1966 LP Live at Cafe Au Go Go by the Blues Project.

About this copy: This copy of Live at Cafe Au Go Go is an original 1966 pressing on the Verve/Forecast label.

The cover is VG, with some ring wear and a punch hole in the lower left hand corner.

The disc is M- and looks like it might be unplayed.  It has a couple of faint scuffs from being removed from the inner sleeve.

Background: Released in 1966, Live at Cafe Au Go Go was the debut LP by the Blues Project, and included Al Kooper on vocals and organ.

The LP did not chart in either the U.S. or the UK.

Although Tommy Flanders (who’d already left the band by the time this debut hit the streets) is credited as sole vocalist, four of the then-sextet’s members sang; in fact, Danny Kalb handles as many leads as Flanders (four each), Steve Katz takes center stage on Donovan’s “Catch the Wind,” and Al Kooper is featured on “I Want to Be Your Driver.” Kalb’s moody take on “Alberta” is transcendent, and the uptempo arrangement of “Spoonful” is surprisingly effective. 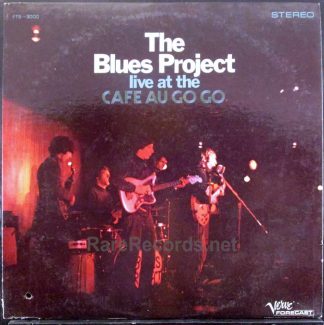