A sealed U.S. pressing of the 1970 LP The Original Human Being by Blue Cheer.

Offered for sale is an original still sealed U.S. pressing of the fourth album by Blue Cheer, The Original Human Being.

About this copy: This copy of The Original Human Being is a sealed original 1970 U.S. pressing on the Philips label.

The wrap is largely intact, with just a small (1/4″ or so) tear on the back in the upper right hand corner.  There is a punch hole there.

A nice copy of a scarce Blue Cheer LP, as all the albums after the first one are rather scarce.

Background: Released in 1970, The Original Human Being was the fifth album by Blue Cheer.  The album peaked at #188 on the U.S. album charts.

Allmusic.com gave The Original Human Being a 3 star review:

Even after cleaning up their act considerably on their self-titled fourth album, Blue Cheer sound positively slick (at least by their standards) on 1970’s The Original Human Being. Though Dickie Peterson was still up front on bass and vocals, guitarist Bruce Stephens had left the group and Gary Yoder, who had contributed to Blue Cheer, came aboard on six-strings and vocals, while drummer Norman Mayell expanded his role, playing occasional keyboards, guitar, and even sitar as Blue Cheer belatedly embraced their Eastern influences on “Babaji (Twilight Raga).” … The Original Human Being feels as if Blue Cheer were trying to build on the lessons learned from their fourth album, but while that record hit just the right note, this one reaches just a bit too far, and it’s most pleasing when the players forget trying to impress us and just go for what feels right. 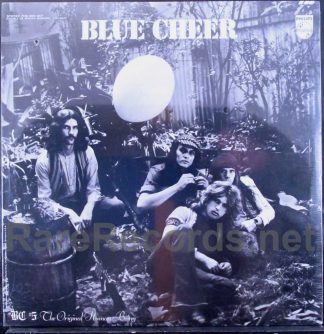