An original Japanese pressing of Live at Last by Black Sabbath, including the original obi.

Offered for sale is an original Japanese pressing of Live at Last by Black Sabbath, including the original obi and insert.

About this copy: This copy of Live at Last is an original Japanese white label promotional copy, issued in 1980 and complete with the original obi and lyric insert.

The cover is M-, with trace wear at the corners . The obi is VG+, with a small repaired tear at the top edge.   The insert is M-.

The disc is M- and may be unplayed.

Background: It’s surprising that Black Sabbath never released a live album during their prime in the 1970s, but the band didn’t issue an official live album until the mid-1980s when Ronnie James Dio was the band’s lead singer.

Live at Last, issued in 1980, was the band’s first live release, but it was released by a former manager without the band’s knowledge or permission. For legal reasons, the album was only released in a few countries and was not released in the United States.

Despite this, the album is a good recording of a couple of 1973 live performances that caught the band in their prime.

Live at Last is a single LP that was recorded before Osbourne’s departure but didn’t come out until after he had left. … As for the performances, the Osbourne/Geezer Butler/Tony Iommi/Bill Ward lineup of Sabbath is in decent form on such menacing favorites as “War Pigs,” “Paranoid,” “Sweet Leaf,” and “Children of the Grave.” Live at Last, which made it to American stores as an import, is by no means definitive — how could it be without “Iron Man”? But even so, fans were glad to finally have a live recording of Osbourne-era Sabbath that wasn’t a bootleg. 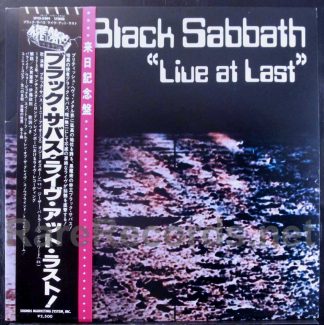