A 2004 Japanese 180 gram reissue of The Wooden Glass Recorded Live by Billy Wooten.

Offered for sale is a rare 2004 Japanese reissue of Billy Wooten’s 1972 legendary live album, The Wooden Glass, complete with obi.

About this copy: This copy of The Wooden Glass is the 180 gram 2004 Japanese reissue on P-Vine, complete with obi and insert.  As far as we know, this LP is new old stock and is unplayed.

The cover is M-, though it has a very small corner bend.  Insert and wraparound obi are M-.

The disc was shipped from the factory in a heavy paper sleeve, and has a couple of faint scuffs from being inserted and removed, though it’s now in a friction-free rice paper sleeve.

We’ll call it VG++, just because it isn’t quite perfect, but in all likelihood, the record is unplayed.  Clean disc!

A beautiful copy of a hard to find reissue of a terrific album.  Original U.S. pressings have sold for more than $3000.

Background: The late Billy Wooten isn’t particularly well known among vibraphone players, and when you live in a world with the likes of Victor Feldman, Lionel Hampton and Milt Jackson, it’s easy to get lost.  Wooten did some recording in the early 1970s as a member of Grant Green’s band for Blue Note, and after that, he settled down in Indianapolis and became a local fixture.

A live recording of Wooten’s band, The Wooden Glass, playing at the 19th Hole club in Indianapolis was released on a local label, Interim Records, in 1972 under the title The Wooden Glass Recorded Live.

The album sold modestly, as small independent releases are likely to do, but at some point, the album caught on with collectors, who loved its mixture of jazz, soul and funk, with prominent vibes, organ and funky guitar.  Original copies of the album on the Interim label have sold for as much as $3000 and even copies in so-so condition usually sell for $1000 or so.

In 2004, the Japanese reissue label P-Vine issued a limited edition pressing of The Wooden Glass, pressed on 180 gram vinyl, and as far as we know, this was the only authorized reissue of the album.  The pressing sold out almost immediately and is now long out of print.

You can hear the opening track from The Wooden Glass, “Monkey Hips and Rice,” here: 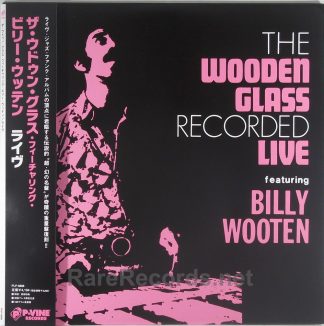