A limited edition audiophile “Mastersound” Japanese pressing of The Nylon Curtain by Billy Joel, including the original obi.

Offered for sale is a copy of the Japanese “Mastersound” pressing of The Nylon Curtain by Billy Joel, including the original obi.

This was part of a limited edition, heavy-vinyl series of digitally remastered audiophile pressings.

About this copy: This copy of The Nylon Curtain is an original 1982 Japanese digitally remastered heavy vinyl pressing, issued in Columbia’s short-lived Mastersound series.

This copy includes the following inserts; all are M-:

The disc is M- and looks unplayed.  Beautiful copy!

A nice copy of a scarce Billy Joel LP that was not issued as part of the U.S. Mastersound series.

Background: Released in 1982, The Nylon Curtain was the eighth solo album by Billy Joel.  The album reached #7 on the U.S. album charts, helped by the singles “Allentown,” “Pressure,” and “Goodnight Saigon.”

Billy Joel hit back as hard as he could with Glass Houses, his bid to prove that he could rock as hard as any of those new wave punks. He might not have proven himself a punk — for all of his claims of being a hard rocker, his work inevitably is pop because of his fondness for melody — but he proved to himself that he could still rock, even if the critics didn’t give him any credit for it. It was now time to mature, to move pop/rock into the middle age and, in the process, earn critical respect. In short, The Nylon Curtain … is layered, successful, mature pop that brings Joel tantalizingly close to his ultimate goal of sophisticated pop/rock for mature audiences. 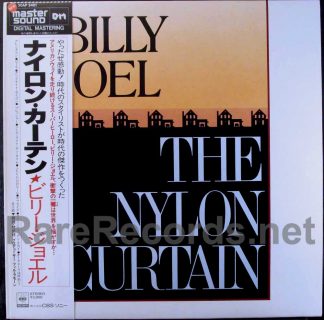