View cart “Toto – Turn Back original Japan LP with obi sticker” has been added to your cart.

A Mercury Golden Imports pressing of the soundtrack to Alfred Hitchcock’s Vertigo, written and conducted by Bernard Herrmann.

Offered for sale is a copy of Bernard Herrmann’s Music from Alfred Hitchcock’s Vertigo, released in the Netherlands as part of the Mercury Golden Imports series.

About this copy: This copy of Vertigo is a 1977 pressing of the Dutch reissue in the Mercury Golden Imports series.  The record is in M- condition and appears to have had little play. The cove is VG++, with just a few minor wrinkles in the lamination.  A beautiful copy of a great record that’s rather elusive these days.

Background: Alfred Hitchcock’s Vertigo, released in 1958 is regarded by many as one of the best films ever made.  It also has a terrific soundtrack, written and conducted by the legendary Bernard Herrmann.  While there are American pressings of the soundtrack, they are quite rare and have been unavailable for decades.  In the mid-1970s, Mercury Records in the Netherlands started the Mercury Golden Imports series of high quality pressings largely intended for export.  This pressing states on the label that it is the original soundtrack recording.

These pressings tend to be pressed on high quality quiet vinyl and, in our experience, sound terrific.  This album features a different cover from the original U.S. soundtrack LP. 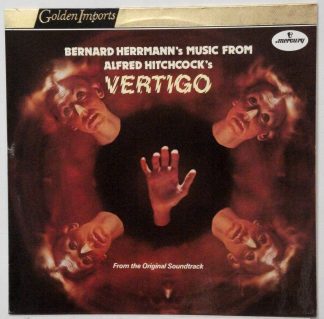