A Japanese promotional copy of Count Three & Pray by Berlin, complete with obi.

Offered for sale is a promotional copy of the Japanese pressing of Count Three & Pray by Berlin, including the original obi.

About this copy: This copy of Count Three & Pray is an original Japanese pressing, complete with obi.  It’s also a promotional copy, with the three-character promotional print on the label as well as a sticker with the same characters attached to the obi.

The cover is VG++, with traces of wear at the corners and edges.  The obi is M-, and the lyric insert is included.

Background:  Count Three & Pray was a bit of a change of direction for Berlin, featuring more guitars and fewer synthesizers than their previous efforts.  It also included their biggest hit, “Take My Breath Away,” which reached #1 on the charts.

You can listen to the hit here:

A major change of direction for Berlin, Count Three & Pray was an artistic triumph but a commercial disappointment. After making a name for itself playing very European-sounding synth pop, the L.A. trio recruited producer Bob Ezrin (known for his work with Alice Cooper and others) and unveiled a more hard-edged, guitar-oriented sound. From the rockin’ “Trash” (which features none other than Ted Nugent — the last person one would expect to work with Berlin!) to the ballad “Pink and Velvet” (a tale of two heroin addicts’ romance that is as poignant as it is disturbing), Count Three & Pray leaves no doubt just how much lead singer Terri Nunn and her colleagues were enjoying this radical change. 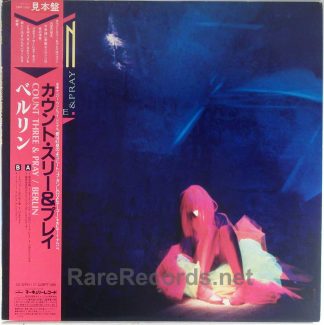