A still sealed copy of the yellow vinyl pressing of the Beatles’ Reel Music, issued in 1982 as a promotional item only.

Offered for sale is a still sealed copy of the numbered, yellow vinyl release of the Beatles’ 1982 LP, Reel Music.

The yellow vinyl pressings were issued only for promotional use; all copies sold in stores were on black vinyl.

About this copy: The copy offered for sale is a still sealed, numbered, promo-only copy, pressed on yellow vinyl. This copy is numbered 984 out of 12,000 copies.

The shrink wrap is nearly fully intact, with no rips, tears or holes.  There’s a tiny break in the wrap (we almost missed it) in the upper right hand corner.

There is a hype sticker on the wrap advertising the included photo booklet.

As the album is still sealed, the yellow vinyl disc is presumably new and unplayed.

A nice copy of a great Beatles collectible.  While not the lowest number we’ve had for sale, it is the lowest-numbered sealed copy we’ve had in quite a long time.

Background: Reel Music was a compilation album released in 1982 by Capitol Records that contained songs that had appeared in the Beatles’ films A Hard Day’s Night, Help!, Magical Mystery Tour, Yellow Submarine and Let It Be.

To promote the album, Capitol pressed 12,000 numbered copies on yellow vinyl. These were issued strictly as promotional items and were not offered for sale to the public.

The album featured stereo mixes that were rare to the US or previously unavailable (per Wikipedia): 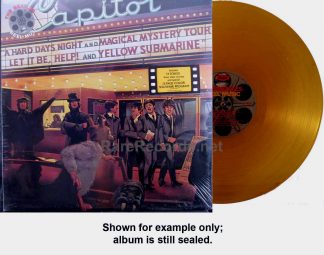